The Stranger You Seek (Keye Street 1)


I had once been called Special Agent Street. It has a nice ring, doesn't it? I was superbly trained for this kind of work, had done my time in the field before transferring to the National Center for the Analysis of Violent Crime NCAVC at Quantico as a criminal investigative analyst, a profiler. A few years later, the FBI took away my security pass and my gun, and handed me a separation notice. You merely lack focus. I was escorted that day to the FBI garage, where my old convertible, a '69 Impala, white-on-white and about half a mile long, was parked at an angle over the line between two spaces.

Fire one Special Agent, get back two parking spots. Sweet deal. Now, four years later, I passed under the curtained front window and congratulated myself on accomplishing this soundlessly. Then the rotting porch creaked.

The strobe from a television danced across the windows, volume so low I could barely make it out. I waited, still, listening for any movement inside, then stuck my head round and tried to peek between the curtains. I could see the outline of a man. A big outline. Jobs like this can be tricky. Bail jumpers move fast.

You've got to go in when you can and take your chances. No time to learn the neighborhood, the routines, the visitors. I was here without the benefit of surveillance, without backup, going in cold with my heart thundering against my chest and adrenaline surging like water through a fire hose. I could taste it. Almonds and saccharin. I was scared shitless and I liked it. Atlanta in summer-suffocating and damp. Nerves and humidity sent sweat trickling from my hairline and over my darkened cheekbones.

I was grease-painted and dressed for night work, crouching near the front door, searching my black canvas backpack for Tom. Anyway I called it Tom, as in Peeping Tom, a thirty-six-inch fiber optic tube with a miniature screen attached to one end, an electronic eye to the other. Tom takes a lot of the guesswork out of jobs like this.

As I twisted and turned the tiny tube under the door, I got a pretty good look at the front room. The subject, Antonio Johnson, was a repeat violent offender. He'd been out of prison for two months when he robbed a convenience store. I had traced him to Canada three weeks ago and lost him. But his ex-wife was in Atlanta and Johnson had a history of stalking her. She'd been getting hang-ups again.

A trace of the calls, with the help of a friend at APD, led to a pay phone in a sleazy motel in Atlanta's crack- infested West End. I found people there who knew Johnson. One of them ratted him out for thirty dollars. He was staying at a place off Jonesboro Road near Boulevard and the federal penitentiary. There even locals check their car doors at stoplights and commuters take the long way around after dark.

I could see him on the three-inch viewer, sitting on a ragged couch, feet on the edge of a wooden utility spool coffee table. He appeared to be alone, a beer in his right hand, his left hand in his lap and partially hidden from view. You hiding something under there, big guy? Hovering in the damp air around the front porch, just above the sweet, sick scent of trash and empty beer cans, was the aroma of something synthetic like Super Glue and Styrofoam.

I released the safety on the Glock, then tapped on the front door. I was going to use my best woman-in-distress voice, say I needed a phone, say I had a flat, say something, anything, to get the door open.

I wasn't sure. I'd learned to improvise since I'd been on my own. Johnson didn't hesitate. I got a glimpse on my tiny viewer of something coming out of his lap seconds before he blew a hole in the door near my ear the size of a softball.

The Stranger You Seek by Amanda Kyle Williams | | THE BIG THRILL

The blast was cannon-loud, splintered the door, and left me light-headed and tumbling off the porch to safer ground. Another blast. The front windows exploded. Glass flew like shrapnel. I balled up against the side of the porch and felt the sting on my neck and arms and knew I was cut, then rose up enough to get a shot off in the general direction of the front window. I didn't want to shoot him. I merely wanted him to back off a little.

The Stranger You Seek trailer

Then silence. I took the porch steps in a half crouch, made it to the door. Still quiet.


I tried reaching through the hole in the door to unlatch it. That's when I heard it, a shotgun, a goddamn pump-action, and if you've ever heard the sound, you'll never forget it-the foregrip sliding back, one shell ejecting, another pushing into the carrier, the bolt closing. It happens in a split second with a good operator, and Johnson had had plenty of practice.

The Stranger You Seek (Keye Street 1)

I pressed my back against the house, took a breath, took a moment. A quick reality check is always a good idea in these situations. Did I really want to get killed bringing in this guy? Hell no, I did not, but the adrenal flood of mania this kind of event produces propelled me forward rather than back, which perhaps illustrates most effectively the differences between those of us in this business and the sane population. 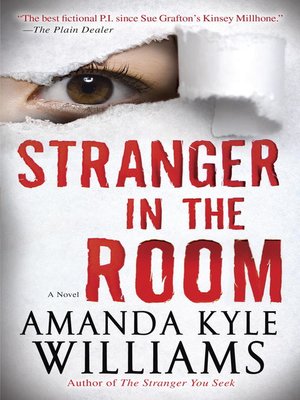 I felt it under my feet, like a fireworks show when the ground shakes. He was probably making his own loads. God only knew what he was firing at me. Another chunk of front door blew out. Then the pop, pop, pop, pop of an automatic weapon. On three, I told myself. Two and a half. Two and three quarters. I put everything I had behind one of the black combat boots I wear for this kind of work and went for the space just above the front doorknob.